Retention is now widely appreciated as one of the most important metrics for growing a product’s user base. This fact, however, takes time to appreciate. We often ignore retention because it is a pretty boring metric. There are no big spikes or dips. Instead, we look at things like new user acquisitions - with its big spikes from good press or heavy marketing spend. But without good retention, newly acquired users will soon leave for greener pastures. A product must get users in the door and then keep them there if it is to grow in the long run.

Unfortunately, moving retention can be hard. A single bad experience is enough for someone to leave. Wouldn’t it be nice if there was a way to sift through user data to uncover specific areas for improvement? Thankfully, some very clever people have already solved this problem. The field is called Survival Analysis and it is concerned with the factors that lead to failure. Survival analysis is used extensively in engineering to model component failures, and in medical research to study disease relapse or death.

Survival analysis is distinct from other types of statistical inference because of data censoring. When a unit is lost to observation we say that it is censored. For example, medical research patients that make it to the end of a study or withdraws is considered censored. Instead of being a specific point, this patient’s record is now an inequality because we only know that the patient survived longer than the study period. The methods introduced by survival analysis allow us to fully exploit data containing these inequalities.

All survival analyses start by specifying an end point of interest. In cancer studies we usually look at either death, or relapse. If death is the endpoint, then we consider all patients who withdraw or are alive at the last follow-up to have been censored. If we choose relapse, then patients who are lost to follow up, or die during the study are censored. Essentially, censoring refers to a patient that did not experience the end point of interest. In our data set, every patient either had an event, or is censored.

On Monday morning, we arrive to find a big box waiting on our desk. The box has N microchips inside. To study their lifetimes, we plug them each into a stress testing facility, run it to failure, and record the time. This gives us our data set of failure times.

Observing that chips fail randomly, we reach for the language of probability as a starting point.

Let T be a random variable that represents the time, in days, that it takes for a microchip to fail. Here is an example of what our data set of failure times could have looked like.

One of the most natural ways to summarize the lifetimes is bucket the failure times, and then state the proportion of failures in each bucket. Let’s make a plot using that strategy. 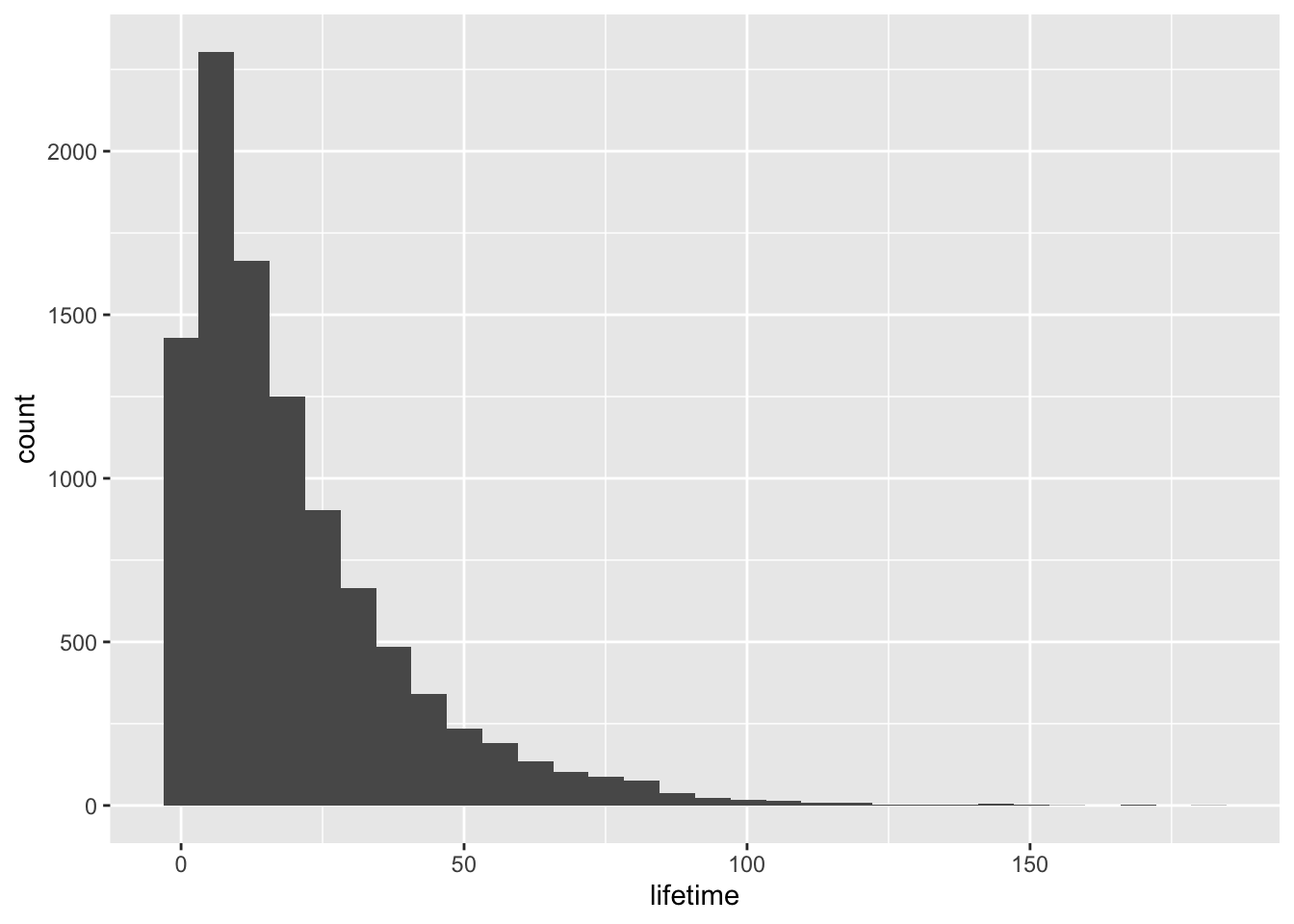 There is one difficulty with this bucketing approach though. We need to pick some arbitrary width for the buckets. If we pick days, for example, then a customer who needs more precision will ask why we didn’t pick hours, and so on. Instead, we can use some cleverness to describe the rate of failure at each instant in time. Then a customer who desires data at any particular granularity can sum over a window of interest to get a probability of failures in that window. We recognize this as our friend the probability density function (PDF) and call it \(f(t)\).

If we could come up with such a function, call it \(f(t)\), and then our customer could calculate the probability of failure between any two times \(t_1\) and \(t_2\). Formally,

We can plot the distribution function of our data by plotting the proportion of failures up to any time point t. 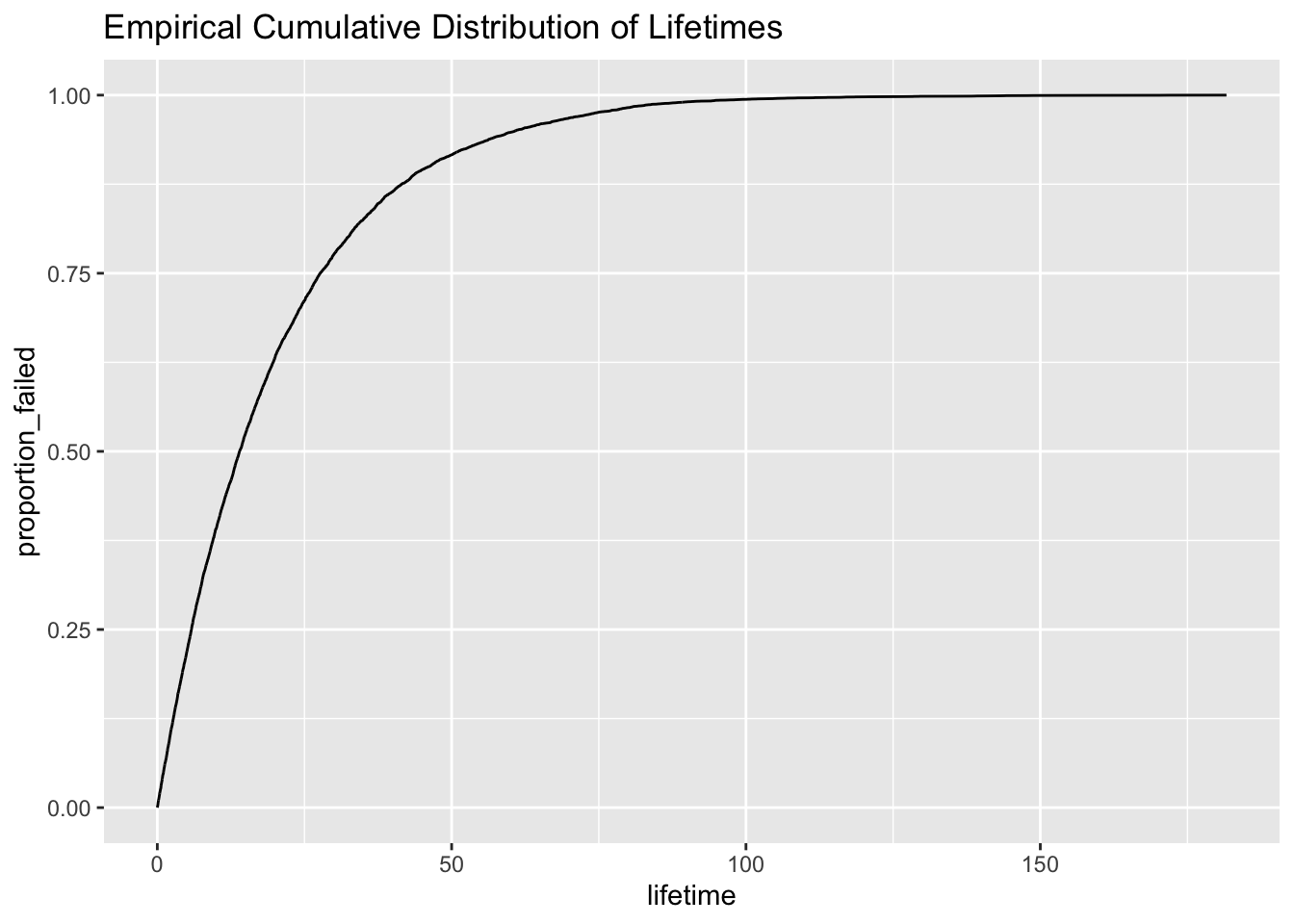 The CDF and PDF have a very simple relationship. Since our PDF gives the rate of failure at each instant in time, the probability of failure from time 0 up to some time t is simply the sum of the PDF multiplied by the width of the interval from 0 up to t. Since our intervals are tiny, integration is required:

In the case of survival analysis, working with densities and distributions become cumbersome. Instead, statisticians defined two new functions, the survivor and hazard, which are easier to work with. They both have a simple relationship to the distribution and density functions.

The hazard function, h(t), is the rate at which events occur at time t given that they have survived up to at least time t.

This is pretty unintuitive, so let’s unpack how we got to this definition. Going back to our microchips example, we are interested in the proportion of chips that fail within a unit of time. Wouldn’t it be nice to have a function that, given a time in days, t, gives back the proportions of parts that will fail per day?

Say we wanted to find this rate of failure on days 20 and 21. Intuitively, we would look for all chips that failed after day 20, and then count the units that failed between days 20 and 22. We divide these two numbers to get a proportion and then divide by 2 to get the proportion of failures per day. This will be a good approximation of the true failure rate around day 20 if the number of chips we observe, N, is large enough.

If we repeat this for all even days, then we will have a function telling us how the rate of failure changes over time. For electronic components, we expect this to be U shaped, because defective chips will fail almost immediately and then the rest will function until their internals wear out.

Let’s do the calculation in R to make things concrete. 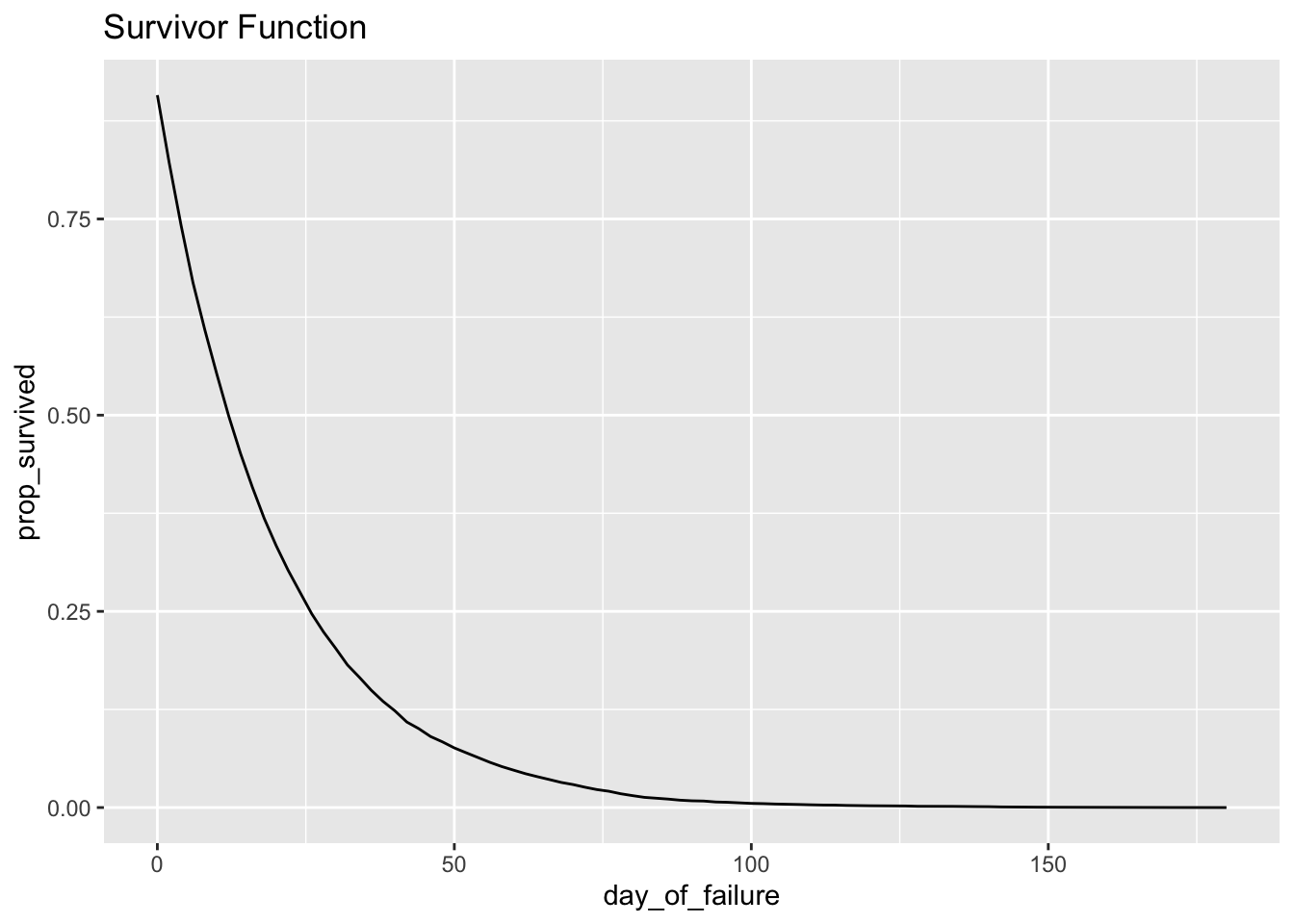 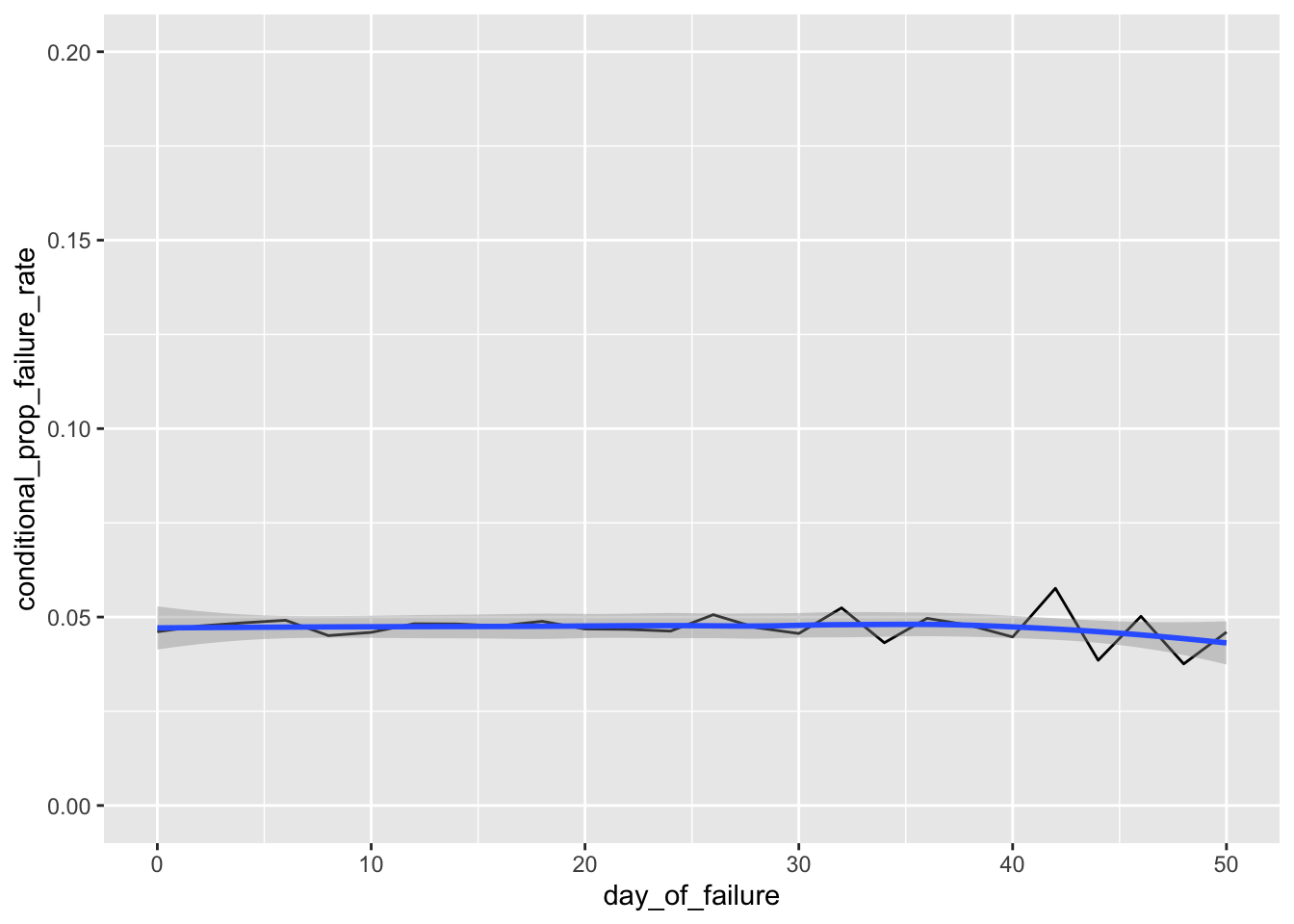 Of course, slicing by even days is arbitrary. Why don’t we do it by 1/10ths of a day instead to get a more detailed look at how the failures occur over time. Again, we will divide by the width of the interval to get the failure rate per day. Notice that we can compare these two rates because they have both been normalized to proportion of failures per day. Of course, we expect them to be the same. 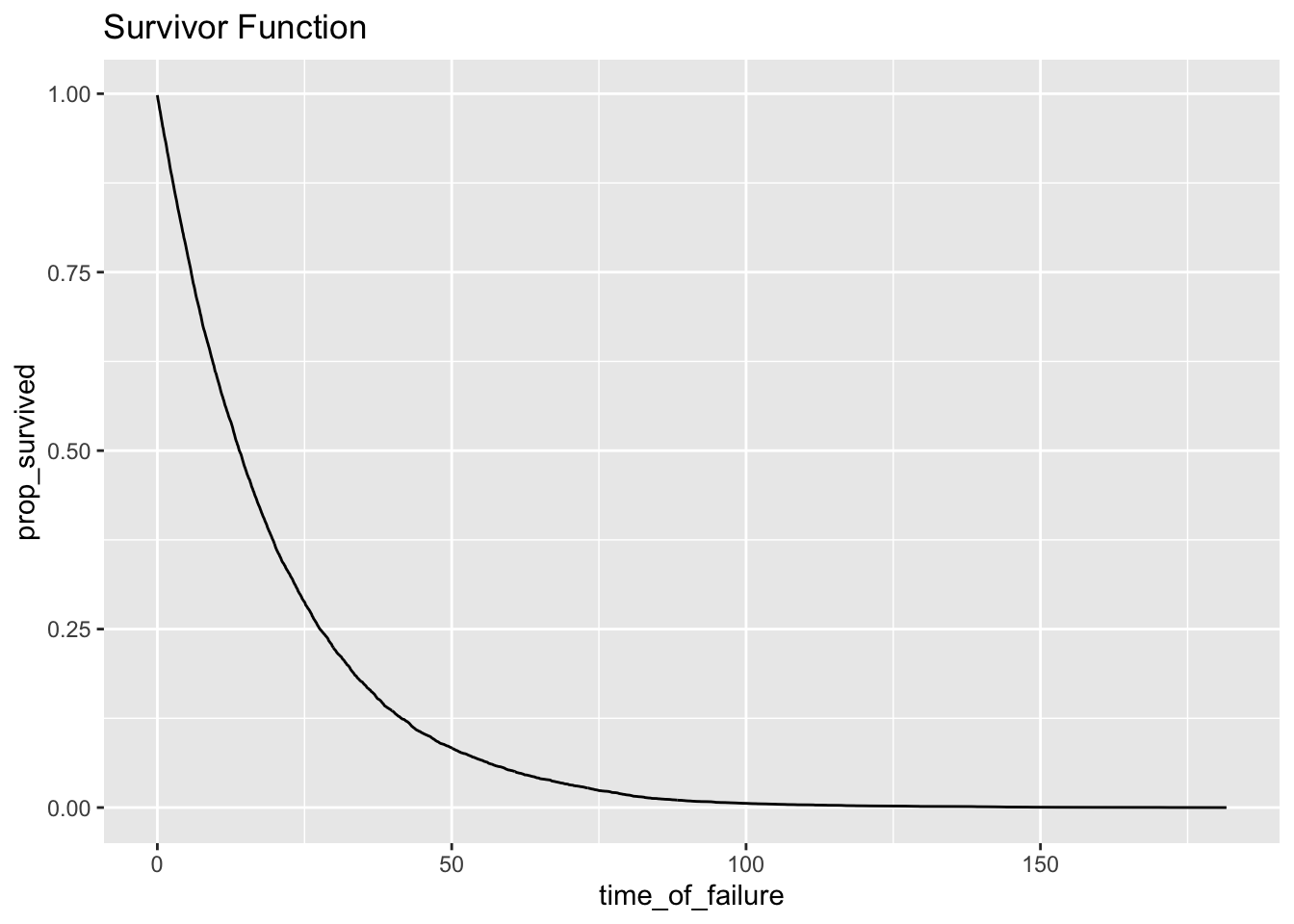 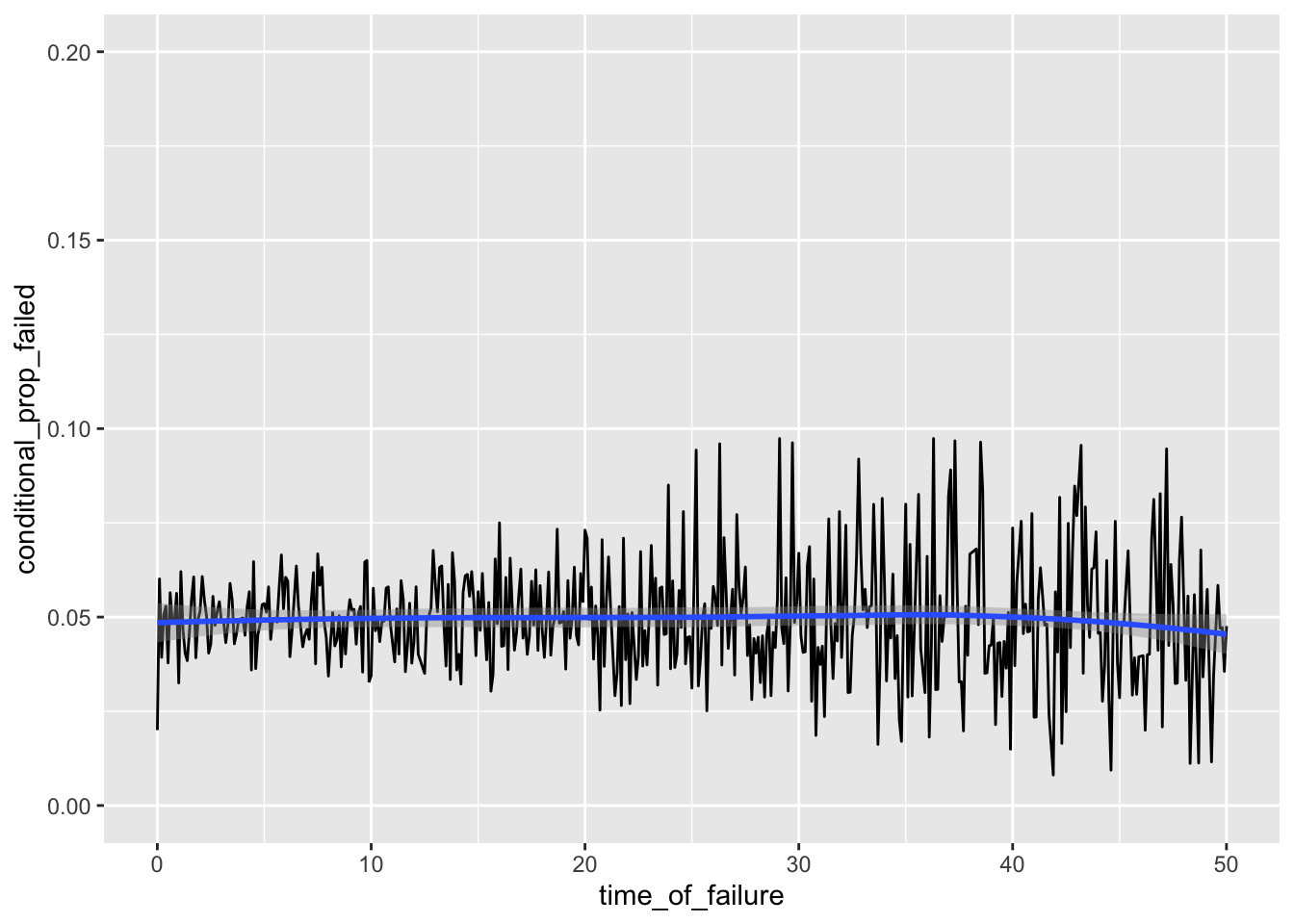 Now that we understand the process, there is no point in stopping at 1/10th of a day. We can keep slicing to finer time slices until they are infinitesimally small. This is what we will use as the hazard rate function.

Relationship of hazard to other functions

In the previous section, we defined four functions to describe survival times: density, distribution, survivor and hazard. We will now look at how these four functions are intimately related. In fact, knowing one of the functions allows us to get at any of the other three.

Using some elementary definitions from probability, we will see that the hazard rate is just the density divided by the survivor: \[ h(t) = \frac{f(t)}{S(t)} \] Here is the derivation.

A convenient function to have around is the cumulative hazard.

A little bit of algebra reveals this new function to be nothing more than the negative log of our old friend the survivor function.

The cumulative hazard is convenient though, because we can re-write all the other functions as follows:

This means that once we specify a hazard function, we can easily retrieve all the other functions. Let’s walk through an example of how to do this with the Weibull function.

The Weibull hazard is commonly used by engineers to model failure times. Intuitively, the Weibull function models the time until failure of a component where the hazard rate changes over time. See here for more details.

Here is the form of the Weibull hazard, along with the other three functions:

We obtain H(t) from h(t) by integration, and then use the relationships described above to get at the survivor, distribution and density functions. To get a specific Weibull, we would specify the parameter p or estimate it from our data.

Observations not starting at time 0

In real world data sets, we very seldomly observe subjects from the onset of risk at time 0. Instead, there is some starting time \(t_0 > 0\). In these cases, we can work with the conditional variants of our functions.

A less common, but very useful, way to describe the data is the quantile function. These functions allow us to generate artificial datasets. Often denoted Q(u), a quantile function is defined as the inverse of the cumulative distribution function.

We can use the [Probability Integral Transform], to simulate failure times given a hazard function. The transform tells us that passing draws of a random variable through its’ own distribution function results in a uniform random variable. We can also run this process in reverse and pass a uniform through the quantile (inverse cumulative) function.

For example, let’s take a look at failure times for a Weibull with p=3. Here is the cumulative distribution function, and its’ inverse:

We can also describe the conditional distribution of failure times for when we start observing at some time t_0 that is not 0.

Using our definitions of conditional distributions above, we can derive the conditional quantile function for the Weibull.

Using our Q(u), we can simulate from the conditional distribution with t_0 = 2, and p=3

We can use this conditional quantile function to generate repeated failures by conditioning on the previous failure time. That is, if a unit could fail repeatedly, then we would run a unit to failure and then restart the process so that each failure time is larger than the previous.

The cumulative hazard is much easier to interpret than the hazard. We can think of the cumulative hazard as the total amount of risk a component has picked up as it travels through time. As an analogy, imagine that you are walking along a path, and at each step you have to pick up a rock. These rocks start getting heavy as you go, until at some point you collapse of exhaustion. This is similar to how risk builds. Recall that \[ S(t) = exp(-H(t)) \] . So a cumulative hazard of 2 at some time point t means that the probability of making it past t is just 13.5%:

Another way to think about cumulative hazard is how many times we expect a single component to fail if it could fail multiple times. In this case, with H(t) = 2, we expect the same component to have failed twice. This is called the count data interpretation.

Let’s carry out a simulation with our Weibull distribution.

That’s it! To recap, we have learned how we can use the density, distribution, survivor and hazard functions to describe failure times. From these four functions, we can derive the quantile function to simulate failures and cumulative hazard to interpret the average number of failures when repeated failures is allowed. Next time we will discuss how to estimate these functions in the presence of censored data.

If a RV X is distributed according to some CDF, F. Then F(X) is the uniform.

For example, let X represent scores on a test. Plugging X into F will give back the percentile, that is the number of scores that were lower than X. Percentiles are uniformly distributed, that is there are as many people between the 1st and 2nd percentile as there are between the 49th and 50th. The CDF’s job is to exactly redistribute the test scores such that it is uniform over [0,1].

We can use this fact in reverse. Given a uniform variable and a CDF, we can apply the inverse to get back the RV distributed according to that CDF.

If U is a uniformly distributed RV on [0,1], then Q(U) is a RV with cumulative distribution F.